With titles such as Something Borrowed and Baby Proof on her bibliography, Emily Giffin is hands down one of the queens of ‘chic-lit’ literature – next to JoJo Moyes and Sophie Kinsella of course.However, in her latest novel, All We Ever Wanted, Giffin begins
to stray from her roots. The result? One of the best novels that I’ve read this year.

All We Ever Wanted starts out with elite Nina Browning and her husband, Kirk. The couple are at one of their charity functions — a typical night out for the couple. Nina is a stay at home wife, whose charity and shopping fills her days, since husband Kirk makes more money than ever due to deals. 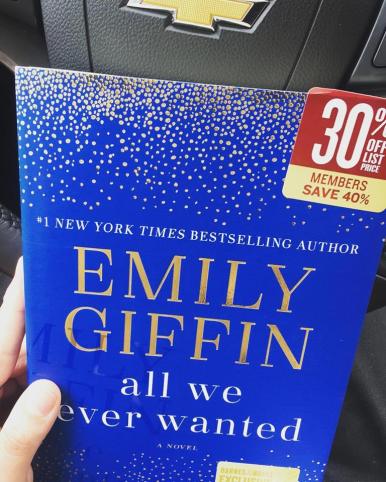 However, across town, their 18 year-old son Finch makes the biggest mistake of his life. He takes a racist picture of a drunken girl passed out on a bed – Lyla Volpe – and has it sent around school. Soon enough, Finch’s parents have caught wind of what happened, and so has Finch’s school. This results in Finch losing everything he has ever worked for – including his coveted place in Princeton. As a result, we as the reader watch as the characters’ true morals come to show – and how money can never truly make you a good person.

Giffin tells this story through three points of view – Tom Volpe, Nina Browning, and Lyla Volpe. She does this quite well, as this adds a little something extra to the novel. As a reader, you get to see the point of view to what’s going on, whether it may be Lyla (the victim), or how the parents react. I liked hearing about what Nina’s processes
were, in addition to hearing about what it was like for Lyla. Hearing Nina’s point of view helped me understand the effects of this on the parents of the person who did it — something that can instantly be forgotten.

What I really liked was the character development of Nina Browning. At the start of the novel, Nina was yourtypical wealthy Nashville wife. However, throughout the novel, she
slowly sees the light on a lot of issues – including her husband’s morals, and what it’s doing to her son. Furthermore, I think the incident removed some of the blindness Nina had for the people around her. While I am not sure if this is realistic, I thought that Giffin did an amazing job with that. I won’t give anything away here, but you’re in for a surprise as the novel unfolds.

The only problem that I had with the novel was this – Lyla’s attraction to Finch. Yes, she’s 15 years old. However, she harbored a crush on him throughout much of the novel – despite the fact that he took this picture that was downright humiliating. Finch lied his way through everything – just to clear his name. Yet, in Lyla’s eyes, he was perfect. Now, this could be the fact that she’s 15 years old and naïve. However, I would be more angry than forgiving to the person who took that kind of picture of me.

With that being said, I still really loved this book. It was superbly written, and Giffin kept readers engage from the first chapter down to the last sentence. Therefore, I highly recommend that if you’re looking for a great book for your beach trip or summer travels, that you pick up All We Ever Wanted. Chances are, you’ll be reaching for her other books next (which I can tell you from experience that they are just as well written).